fanmix: hold my head up to the midnight sun

hold my head up to the midnight sun 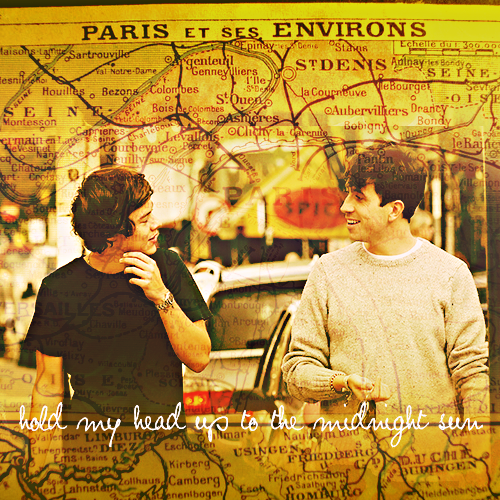 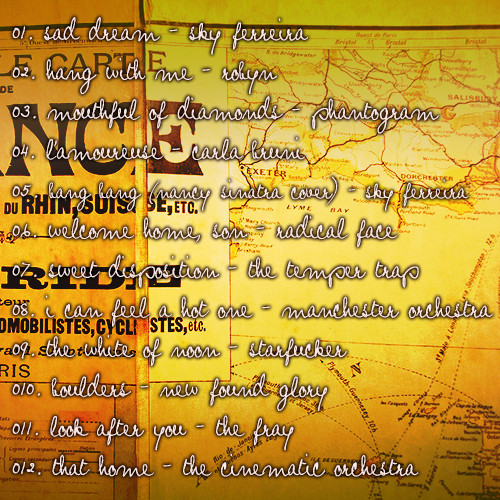 for the fanfic of the same title by

He’s not sure why, but Nick thinks he really doesn’t want to go home yet, so even though this boy is strange and young and possibly dangerous, his mouth is saying “You could come along, if you want?”
i live by my own laws, stick to my guns,
hold my head up to the midnight sun.
sad dream - sky ferreira

He knows he’s been drinking, but this is something else, something he doesn’t quite know yet. All he knows is that when he sits down across from Harry in the ratty booth and says “Can I buy you a drink, then?” it comes out easily, and when Harry says yes, he thinks that if he believed in fate, this might be close to it.
just don't fall recklessly, headlessly in love with me
cause it's gonna be all heartbreak,
blissfully painful and insanity.
hang with me - robyn

Harry seems reluctant to tell Nick too much about anything all at once, preferring to talk in riddles and torn ­up little pieces of half ­information, and Nick has to paste it together to figure out that Harry’s 19, that he dropped out of uni, that he sends money home to his mum and sister each month, and likes working with animals and food, but not children or academics.
you've got a mouthful of diamonds,
and a pocketful of secrets.
i know you're never telling anyone.
mouthful of diamonds - phantogram

It’s a tiny patio, but every surface is covered in ivy and creeping vines, tiny purple and yellow flowers turned up towards the small patch of sky above them. There are brick walls on every side, and it’s not more than a few feet across, but there’s a wooden bench off to one corner, and it’s lit by soft orange sodium lamps, and it’s lovely.
la vie change de manières et dansent les mirages,
on a vu m'a-t-on dit le destin se montrer,
il avait mine de rien l'air de tout emporter.
l'amoureuse - carla bruni

But then he keeps thinking about kissing Harry when they look at Van Gogh’s sunflowers, and when they share a spliff in the park and Harry laughs so hard at an ugly pigeon that he nearly chokes to death on a chip. He thinks about kissing Harry in the little bedroom they rent from a tiny woman who must be at least ninety, and thinks about it at night when they traipse through the red light district, everything hazy with whiskey and beer and the smell of Harry’s shampoo just at Nick’s elbow all night.
bang bang, he shot me down.
bang bang, i hit the ground.
bang bang, that awful sound.
bang bang, my baby shot me down.
bang bang (nancy sinatra cover) - sky ferreira

The little waves tangle up around Harry’s ankles and he kicks at the water, laughing like a mad person and soaking the bottom half of his trousers. Nick smiles, and feels strangely like everything’s gone huge, but shrunk down to just the two of them at the same time.
now my head's splitting at the seams
and i don't know if i can here, beneath my lungs,
i feel your thumbs press into my skin again.
welcome home, son - radical face

“This is mad,” Harry says, doubled over on his skis in laughter.

“Have you hit your head? Should I call one of the medics over?” Nick says primly, shaking the arms of his borrowed coat out. It’s a bit short in the wrists, but he hadn’t thought to bring a winter parka in May, so it’ll have to do.

Harry just laughs harder until he has to sit down backwards in the snow with an audible whoompf to save himself from going head over arse down the mountain.
sweet disposition, never too soon.
oh, reckless abandon
like no one's watching you.
sweet disposition - the temper trap

“If I look out for ghosts, reckon you can get some sleep?” he asks.

“Mm,” Harry mumbles. He’s still staring at that same corner, but his eyes are drooping now. “Maybe if you keep watch. Properly, though.”

“Don’t worry, ‘m very vigilant,” Nick assures him. Harry nods as his eyes close, but Nick couldn’t say if he actually heard him or not.
i could feel a hot one taking me down
for a moment, i could feel the force
i can feel a hot one - manchester orchestra

Nick doesn’t mean to laugh at Harry, really. But they’re in the massive posh casino right in the heart of the city, and Harry wearing an oversized borrowed suit jacket because there’d been a dress code Nick hadn’t known about, and the put out expression on Harry’s face is too much ­­ Nick has to find a cocktail before they’re more than three steps inside just to occupy himself with something long enough to stop cackling.
slowly, i know we are dreaming
feeling, destroy me
i am nothing, i am nothing
the white of noon - starfucker

Harry doesn’t move from the bed, just seems to shrink further in on himself as he gazes at Nick, and he has to look down the floor, look anywhere else besides at Harry. He looks so young and so sad and if Nick stays in this room for another second, he’ll be sick or scream, because it turns out he wants Harry desperately for himself, more fiercely than he’d had any notion he was capable of, but it absolutely can’t happen if Harry thinks ­­ if it’s like this.
i never said that i didn't need you.
put down your arms and wrap them both
right around me, both right around me.
boulders - new found glory

“But if I can help, I want to,” Nick says. “Not, like, because I’m trying to bribe you, or make you my rent boy or something. But if I can at least make things a bit easier for you, and sometimes do nice things like take you on holiday and out for proper meals for no reason, you should let me, yeah? You won’t owe me. ‘S’nothing wrong with that.”
there now, steady love, so few come and don't go
will you, won't you be the one i'll always know?
when i'm losing my control
look after you - the fray

There’s worn­out paperbacks shoved into all of Nick’s bookcases, a startling array of product for curly hair littering all the surfaces in the bathroom, and at least seven sorts of produce in the refrigerator that Nick doesn’t know the names of to challenge that claim, that put together paint a very clear image of Harry’s extended presence.

“I live here, idiot,” Harry smiles up at him. He curls his bare toes around Nick’s ankles tight enough to pinch, and doesn’t stop smiling.
where the windows are breathing in the light,
where the rooms are a collection of our lives,
this is a place where i don't feel alone.
this is a place that i call my home.
that home - the cinematic orchestra